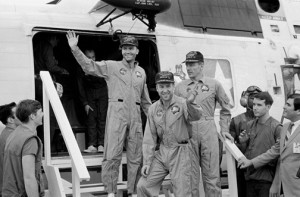 Here, the Apollo 13 astronauts pose smiling soon after landing safely in the Pacific Ocean on 17 April 1970. And smile they should. This photo captures one of the most incredible feats in space history — and may not have existed — had it not been for the expertise and valor of the astronauts combined with the guidance of countless NASA personnel who helped guide the team safely back to earth.

Two days after launching 11 April 1970, things became harrowing as they were forced into an emergency turn-around before ever reaching the moon. Fortunately, the astronauts expertly improvised a repair to the spacecraft and narrowly escaped disaster, ultimately returning safely to Earth.

Some called the mission a “successful failure,” others called it a miracle, but no matter what, it was a testament to each of the NASA astronauts’ ability to improvise and figure out a way home under utter duress.

Jack Swigert’s life changed drastically as he was called to the mission just 72 hours before its fateful launch. Selected as one of the so-called “Original 19” astronauts in April 1966, Swigert, originally a standby astronaut was made a member of the crew of Apollo 13 after Lieut. Comdr. Thomas K. Mattingly was exposed to German measles. 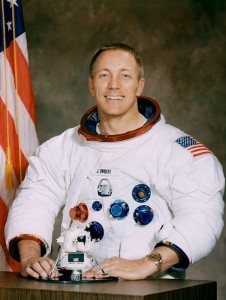 That 11 April 1970 launch day started out fine — here is original NASA footage of the launch:

Things continued to progress smoothly and the crew even lightheartedly joked back and forth with Houston, according to these original transcript quotes,

“How do I apply for an extension?” Swigert asked from space to those in Mission Control, who began to laugh. “Things kind of happened real fast down there and I need an extension. I’m really serious.”

Flight director Glynn Lunney later reassured the astronaut: American citizens who were out of the country received a 60-day filing extension. “I assume this applies,” he told Swigert.

Houston, We Have a Problem

Then, an oxygen tank exploded two days later, crippling the Service Module (SM) upon which the Command Module (CM) depended, the mission was aborted.

Check out Hollywood’s famous rendition of the moment everything changed in the 1995 feature film “Apollo 13,” starring Tom Hanks as commander Jim Lovell and Kevin Bacon as Swigert.

It’s been 44 years since Swigert and his fellow Apollo 13 astronauts made history. We are proud to have the Jack Swigert Estate Auction, personally owned and space-flown items, which is the first time Swigert’s items have gone up for auction.

With almost 100 items in total, the auction ends Thursday May 29th at 5 p.m. Pacific time

The Jack Swigert estate auction has been featured in various media outlets. Check out both this Space.com article as well as this CollectSpace article nicely detailing the estate.

All Jack Swigert estate auction items have a Letter of Authenticity from Jack Swigert’s sister.

And here’s a rundown of the top-ticket items: 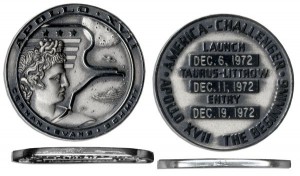 Sterling silver medal commemorates Apollo 17 as the most recent lunar landing conducted by NASA to date.  The mission launched 7 December 1972 and returned safely twelve days later. Pictorial obverse is cast with mission insignia, featuring stylized design elements of the U.S. flag and an eagle, alongside a bust in profile of Greek god Apollo. Figures are set against a detailed space ground featuring the moon and ringed planets. Scene is circumscribed by title, ”Apollo XVII / Cernan-Evans-Schmitt”. Reverse reads, ”Launch / Dec. 6, 1972 / Taurus-Littrow / Dec. 11, 1972 / Entry / Dec. 19, 1972”, circumscribed, ”America – Challenger / Apollo XVII The Beginning”. Coin measures 1.25” and is made of sterling silver, housed in its original ”Robbins Company” plastic box with an ”41” sticker on the bottom. Fine. 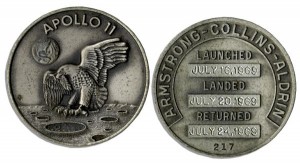 Rare Apollo 11 Robbins medal, serial number 217. This is one of the new coins made from the so-called ”flown medal” and is one of 450 newly-designed medals. 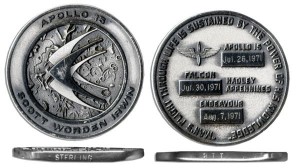 Apollo 15 Robbins Medal, serial number 118. Extraordinarily rare medal is one of just 127 flown from a batch of 304 minted. Due to a misprint of the word ”apennines” on reverse side, most (177) of the medals were sent back to the manufacturer and could not be redone before the spacecraft’s launch, leaving only the 127 with the correctly printed word to make the flight. 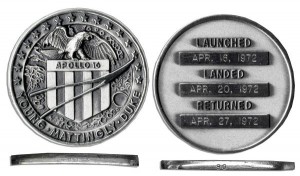 Sterling silver pictorial obverse features various mission insignia, including an eagle perching on a shield with the moon’s surface in the background, as well as each crew-member’s last name. Verso features dates of launch, landing and return engraved. Serial number ”90” is engraved along edge of coin. Coin measures 1.25” and is made of sterling silver, housed in its original ”Robbins Company” plastic box with an ”90” sticker on the bottom. 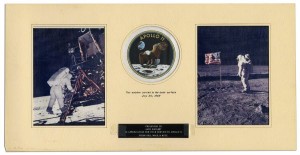 Apollo 11 beta cloth patch flown to the lunar surface during the Apollo 11 mission and presented to Apollo 13 astronaut Jack Swigert. Beta cloth patches were designed as commemorative pieces to carry along the mission in a material made of fire proof material woven from Teflon fibers. Circular patch features various mission emblems including an eagle landing on the moon’s surface carrying an olive branch. 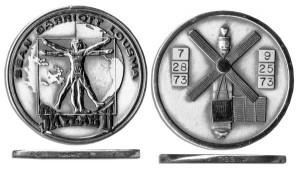 Skylab II Robbins medal flown, serial number 39. Skylab II launched 28 July 1973 and returned 25 September. Sterling silver medal bears the mission insignia cast in relief to obverse: the Vitruvian Man by da Vinci within a square frame, the earth behind him and names of the crew circumscribed: ”Bean – Garriott – Lousma” and ”Skylab II” underneath.

Lot of 6 official patches flown in space on the near-disastrous Apollo 13 mission in 1970. Round patches are embroidered with mission slogan ”Ex Luna, Scienta”, meaning ”from the moon, knowledge” surrounding dynamic mission insignia: a trio of horses galloping over the moon. Five are identical, with embroidery in orange, yellow, brown, black, white and blue with sparkly silver border. The remaining patch is the same design but crafted in muted earth tones. Accompanied by a handwritten authenticity note in Swigert’s hand on U.S. House of Representatives Committee on Science and Technology letterhead. 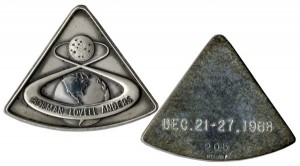 Rare Apollo 8 Robbins Medal aboard the spacecraft during the 1968 mission. The historic Apollo 8 mission was the first human spaceflight to leave Earth’s orbit. Pyramid- shaped sterling silver medal features mission insignia including the number 8 circling the moon and earth, and the last name of each crew member Frank Borman, James Lovell, and Bill Anders to front. 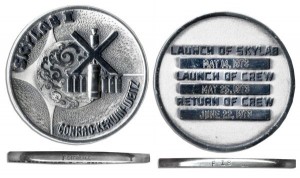 Our past space auctions have included an Al Worden owned joystick controller removed from the Apollo 15 command module that sold for $72,556, and a crew-signed American flag flown on the Apollo 11 mission that sold for $63,195 in January.