NateDSanders.com Gets the Most Money for Your Film Memorabilia 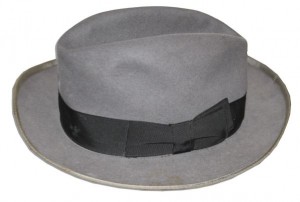 There were 9 bids on this famous stetson hat, which Marlon Brando won to win his second Oscar. As Vito Corleone, Brando played the character created by Mario Puzo, which Premiere magazine has called the “greatest movie character in history.” 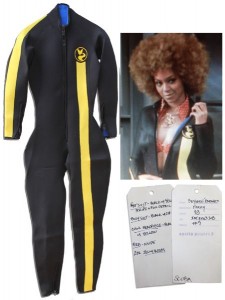 The 2002 American spy film Austin Powers: Goldmember starred Mike Meyers as Austin Powers and Beyonce Knowles, at 19 years old, played Cleopatra Foxxy, an old flame and FBI agent who is under cover as a disco singer.

This wetsuit, just one more example of film memorabilia that sold this auction, was worn by Knowles and sold for $15,625 this March 27th. 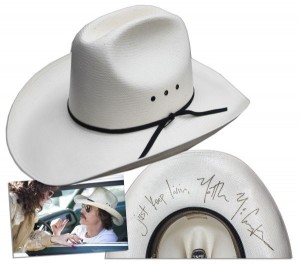 Matthew McConaughy signed this hat, which he wore in the Academy Award winning film Dallas Buyer’s Club. In yet another stunning example of film memorabilia which sold, the Dallas Buyer’s Club hat had 12 bids, reaching nearly $13,000, or $10,000 more than the minimum bid on this item.

The Original Oscar awarded to Herman Mankiewicz for writing “Citizen Kane” sold for $588,455.

An incredible piece of Hollywood history and film memorabilia. The only Oscar won by “Citizen Kane,” voted the greatest American film of all-time by the American Film Institute. Mankiewicz received the award for best original screenplay with the visionary director, writer and actor, Orson Welles, on 26 February 1942 at the Biltmore Hotel. The duel credit to Welles and Mankiewicz would be hotly disputed by both parties, critics and their peers. Influential film critic Pauline Kael attributed Kane’s screenplay to Mankiewicz, particularly offensive to the “one man band” credit Welles was receiving for the film. Rumors materialized publicly that Welles had tried to pay Mankiewicz off, in exchange for Welles to take all the credit for himself. Mankiewicz stated in a letter to his father, “The fact is that there isn’t one single line in the picture that wasn’t in writing – writing from and by me – before ever a camera turned.” The Screen Writers Guild ended the initial debate by decreeing a joint credit on the film but historians still debate whose hand penned which lines of the seminal 1941 masterpiece. Two engraved plaques are placed on opposite sides of the Belgian marble pedestal. One reads, “Academy of / Motion Picture / Arts and Sciences / First Award / 1941”. The other reads, “Academy First Award / To / Herman J. Mankiewicz / For Writing / Original Screenplay of / ‘Citizen Kane'”. The figure and film reel, composed of gold-plated britannium measuring 10.5″ tall, top the pedestal, bringing the total height to 12″. The pedestal’s diameter measures 5.25″. The award weighs 7 pounds, 5 ounces. Some tarnishing to statue, primarily to the leg area of the figure. The green felt backing under the pedestal is slightly wearing away around the edge. Overall in very good condition.

Next film memorabilia auction begins soon. Look for new items up for bid on Nate D Sanders. If you are interested in consignment, click here for more information.