An Adolf Hitler Autograph in “Mein Kampf” Fetched $64,850 at NateDSanders.com

To buy, consign or sell in our Adolf Hitler autograph auction, please email Nate@NateDSanders.com or call (310) 440-2982.

For more details on this item, please click here. 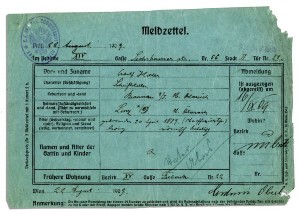 In August 1909, Hitler was a struggling artist/writer living in Vienna. He was about to be turned down for the second time by the Vienna Academy of Fine Arts that October. This piece of Hitler memorabilia is a police document, handwritten (by Hitler) and signed. It was required by law for Hitler to register his change of address, which he did on August 22, 1909. He lived in this apartment until September.  Four months later, in December 1909, “freezing and half starved” he entered a homeless shelter. He ate at a soup kitchen run by nuns. Later, in February 1910, he entered a home for poor men where he lived for several years.

He had arrived in Vienna from Linz, with a  generous inheritance left by his parents. He had the idea that he was above regular work, and rejected the idea (put forth by his relatives) that he should work in the civil service.

While he lived in the home for poor men, he received a small monetary gift from an aunt and began to create art work of famous landmarks which he copied from postcards. He found he could sell these and earn a modest living.  to selling his art to Jewish shopkeepers and was helped by Josef Neumann, his Jewish friend. At the same time, it was during this period that he began to align himself with more antisemitic beliefs.

During these early years in Vienna, he most likely held the general antisemitic beliefs that many middle-class German nationalists shared. Only after World War I did Hitler have the full-blown antisemitic ideology expressed in Mein Kampf and his other writings. In Vienna, though he was beginning to formulate his antisemitic beliefs, he had at least one Jewish friend and relied upon Jewish business people and shopkeepers to buy his art.  This Adolf Hitler autograph document signed sold for $15,000.

Although difficult to face sometimes, if we do not take pains to remember our history we are, as George Santayana famously said, condemned to repeat it. Nate D. Sanders takes a pragmatic approach to auctioning material that may be seen as objectionable: “I think it’s very heinous,” Sanders said, “but it is an auction item, it is a memento, it’s a piece of memorabilia, and a piece of history,” he said of the recently auctioned 2 volume signed set of Mein Kampf (My Struggle) which fetched $64,850 with two Adolf Hitler autograph signatures. 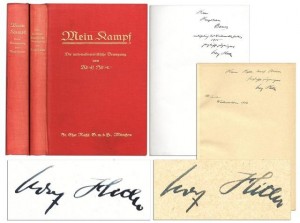 We also sold this set of Mein Kampf books with an Adolf Hitler autograph for $43,750:

Fascinating two-volume set of Hitler’s ”Mein Kampf”, each volume signed ”Adolf Hitler autograph” by the Nazi Fuhrer following his release from prison for high treason, and shortly after his public speaking ban had been lifted. Both volumes are first editions, published by Franz Eher Nachfolger: Munich: 1925-1927. Each volume is inscribed by Hitler to Philipp Bouhler, one of the first members (#12) of the Nazi party and one of the leaders of the Beer Hall Putsch in 1923, when Hitler and his cohorts attempted to overthrow the Bavarian government by gunpoint. Bouhler would ultimately be appointed as one of the few Reichsleiters and as Chief of the Chancellery for Hitler where he led the infamous T4 program. Here, Hitler signs the fly-leaf of Vol. I and the front free endpaper of Vol. II, sending his best wishes to Bouhler for the Christmas season. Volume I translates in full, ”To Herr Philipp Bouhler / in grateful recognition of your loyal work for our movement on the occasion of Christmas 1925 / inscribed most sincerely / Adolf Hitler autograph / Munich, December 24, 1925”. Volume II translates in full, ”To Herr Philipp Bouhler / on the occasion of Christmas inscribed most sincerely as a sign of recognition of your performance of duties / Adolf Hitler autograph / Munich, December 24, 1926”. Rebound in burgundy leather boards with gilt lettering, both volumes measure 6.5” x 9.25”. Light shelf wear and white-out to title page of Volume I. Also with a brochure about Hitler from 1938, written by Bouhler. An ominously signed set of books that futilely warned the world of Hitler’s intentions. Made even more scarce as signed in the mid-1920’s to a fellow Nazi leader.

Adolf Hitler Signed First Editions of ”Mein Kampf” — Both Volumes Signed by Hitler in 1925 and 1926, Inscribed to Philipp Bouhler, Nazi #12 — ”…your loyal work for our movement…”

Incredible Adolf Hitler autograph copy of Adolf Hitler’s ”Mein Kampf”, inscribed by Hitler to a fellow inmate at Landsberg Prison. Hitler was incarcerated at Landsberg in 1924 for high treason after the Beer Hall Putsch in 1923, when Hitler and his cohorts attempted to overthrow the Bavarian government at gunpoint. This second edition of Volume I is signed and inscribed by Hitler, ”To Mr. Wilhelm Briemannin in remembrance of our joint prison time in Landsberg a./L. [Landsberg am Lech] dedicated by Adolf Hitler / Munich December 20, 1925”. Volume is published by Franz Eher Nachfolger: Munich: 1926. Book measures 6.25” x 9.25”. Some rubbing of cloth and gilt titling on boards and sunning to backstrip. Small tear to pages 305-308. Overall in very good plus condition. A very rare signed copy of ”Mein Kampf” before Hitler rose to power, even more rare as inscribed to one of his prison mates. Perhaps the only copy thus inscribed by Hitler referring back to his time in Landsberg, the very place that he wrote ”Mein Kampf”. 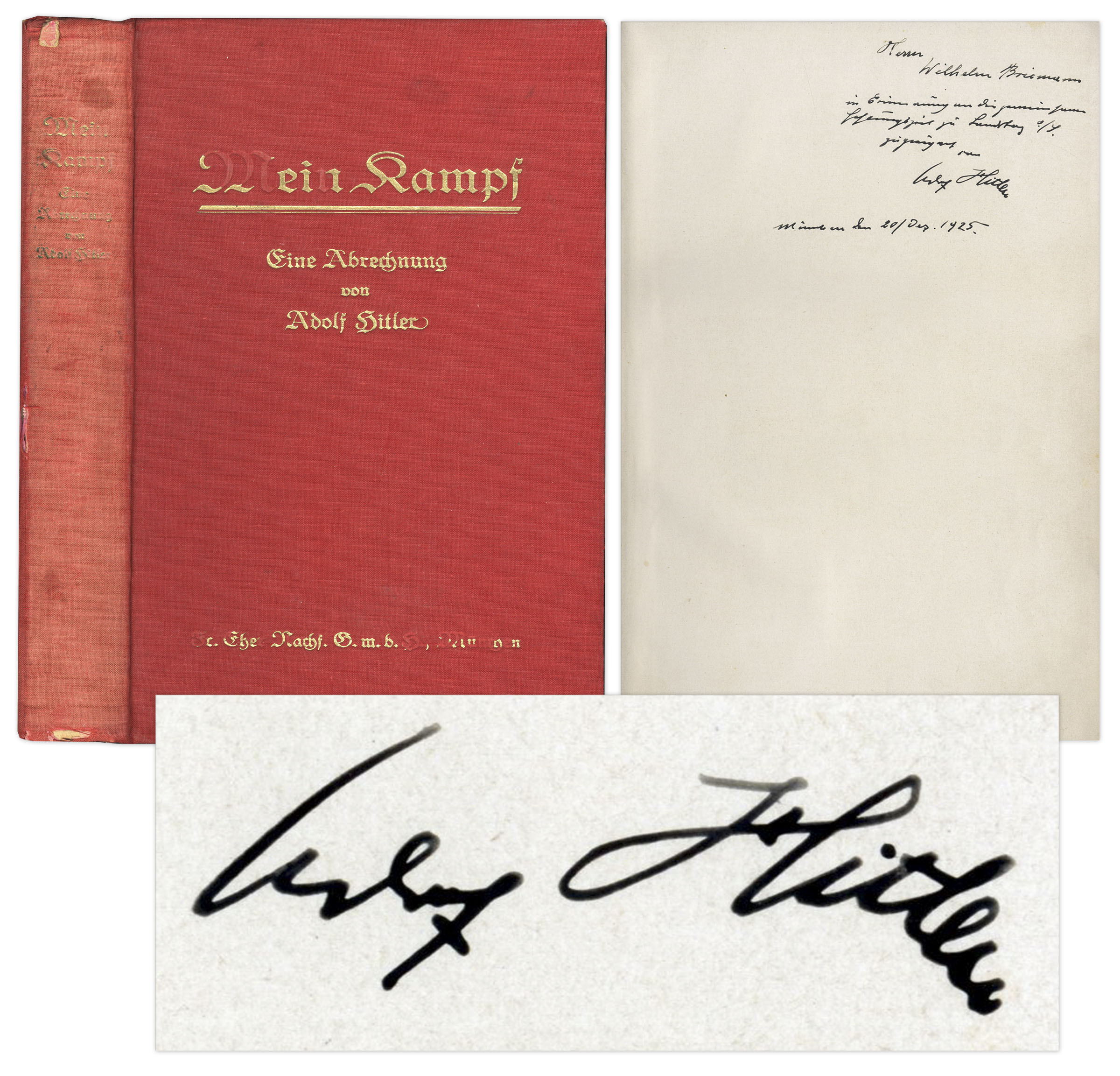 We sold an Adolf Hitler autograph on a large photo of the Fuhrer for $11,250:

Very rare Hitler autograph and dated photo, dated 24 August 1940. Photo is matted and framed in a sturdy black cassette presumably that once belonged to Nazi aviator Flugkapitan Hanna Reitsch, the only woman awarded the Iron Cross First Class and the Luftwaffe Pilot/Observer Badge in Gold with Diamonds during World War II. Her name is engraved to plaque affixed to cover of case. Photo depicts Hitler posing sternly, seated on a chair in a non-military suit. With date inscribed along bottom in German along with his ”Adolf Hitler” signature in black ink. Framed with a metal plaque of the Nazi party emblem, the eagle atop the swastika symbol, opposite photo against red plush fabric matting. With provenance from Charles Hamilton, handwriting and manuscript expert. Letter reads in full, ”I certify that I have examined the frontal portrait of Hitler in civilian clothes, taken by Heinrich Hoffmann in 1938. This particular photograph is encased in a black leather, folding cassette containing a metal plaque on the exterior, bearing the engraved name of Flugkapitan Hanna Reitsch of the German Luftwaffe. Based upon my detailed analysis, I certify that both the date (24 Aug. 1940) as well as the signature written above the date are the authentic writing of Adolf Hitler. Further, this photograph was borrowed from a Canadian Collector and used as the basis for the writing exemplar of Adolf Hitler illustrated on page 191 of my book ‘Collecting Autographs and Manuscripts’, published by the University of Oklahoma Press in 1961. Lastly, I am the author of the standard work on Hitler’s handwriting entitled ‘Leaders and Personalities of the Third Reich”’. Adolf Hitler autograph photo measures 6.5” x 7.5”; black case measures 7.25” x 8.25” with some minor wear to case, else near fine. 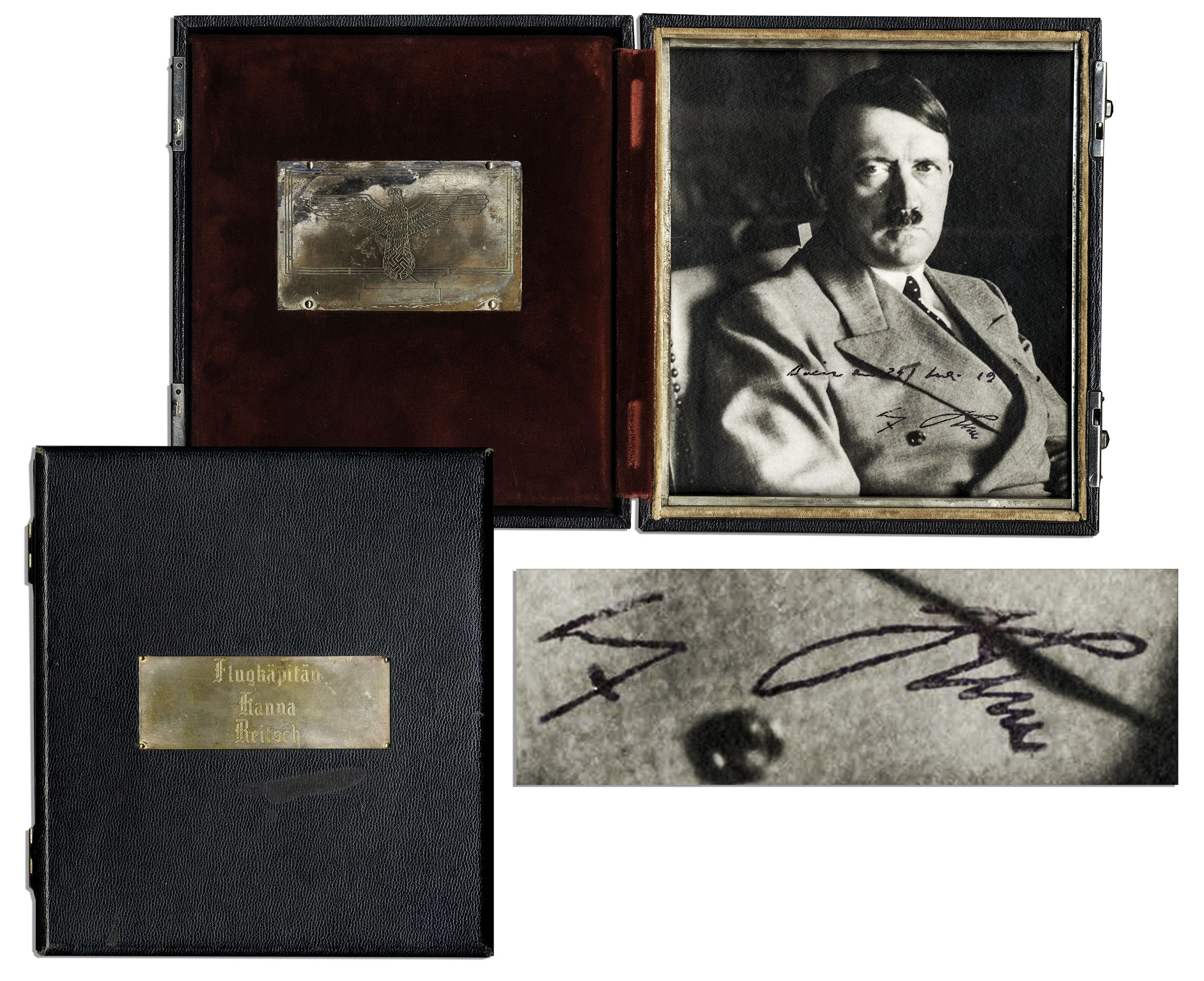 Adolf Hitler autograph document “Af Hitler” as Fuhrer and Chancellor, datelined Berlin, 17 March 1938. With large 3″ blind stamped seal depicting the German Eagle atop a swastika. In German, document translates in part, “Attached are the lists 190, 191, 192, 194, 197, 198, 199, 200, 201 / In the Name of the German Reich. I am awarding to the 25 foreign nationals specified in the attached list the Order of the German Eagle…” Also included in lot is a photocopy of a 7 March 1938 document signed by Hitler awarding the Eagle to “Herrn Prescott Bush,” who appears to have received the “honor” with other Americans including Henry Ford, Charles Lindbergh and IBM President Thomas J. Watson; lot also includes a replica of the German Eagle. Single page document measures 8.25″ x 11.5″. Two file holes in blank left margin and paper clip indentation at upper right. Light soiling and small tear in creased upper portion. Penciled notation in German on two lines in lower blank area, not in Hitler’s hand. Three folds. Very good condition.  Sold for $2,685. 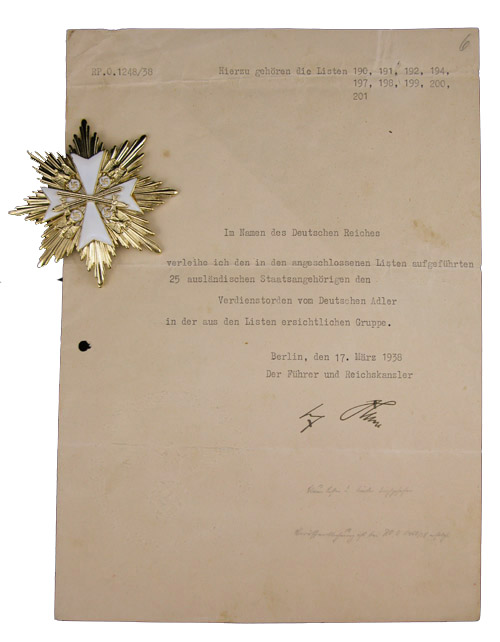 Adolf Hitler autograph document, composed upon his personal Berlin stationery, with a gilt-engraved ”Der Fuhrer” appearing beneath a blind embossed Nazi seal, depicting the German eagle perched upon a swastika. Undated, though from World War II, as evidenced by the stationery. Signed ”Af Hitler”, Hitler here approves a ”Command of the Fuhrer”, Number 79. Measures 7.25” x 9”. Light soiling and folds, overall in very good condition with a very dark and clear signature.  Sold for $1,250. 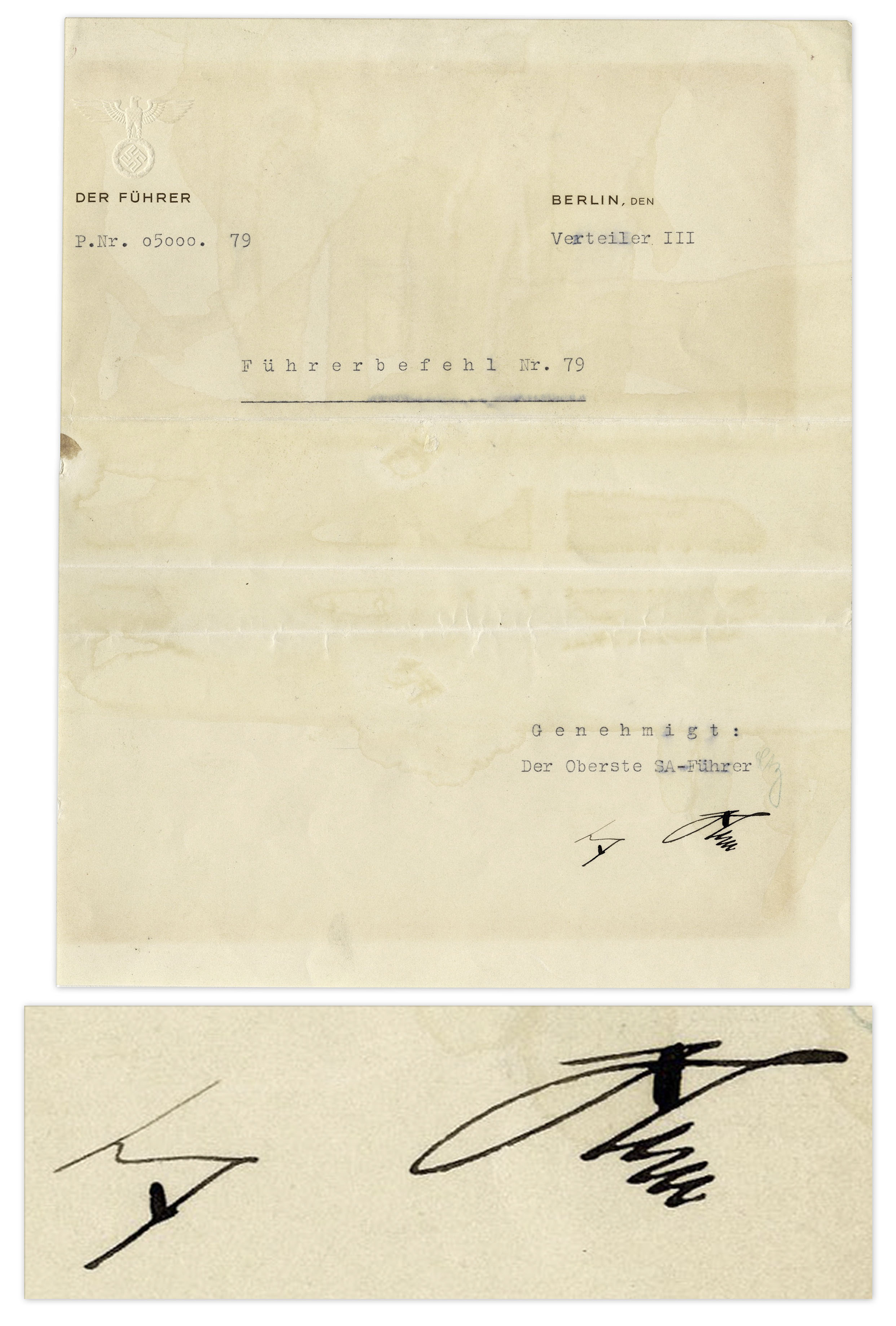 To buy, consign or sell in our Adolf Hitler autograph auction, please email Nate@NateDSanders.com or call (310) 440-2982.