Original U.S. Flag That Hung Over JFK’s Casket Up For Auction

With the entire nation and world in mourning after John F. Kennedy’s horrific assassination that 22 November 1963 day, plans of course were set in motion for his burial.

The State funeral of JFK took place over three days in D.C. following his assassination and on the Sunday after the assassination, his flag-draped coffin was carried on a horse-drawn caisson to the U.S. Capitol to lie in state. Hundreds of thousands of people — from dignitaries to common man lined up to view the guarded casket throughout the day and night.

On top of his casket, an American flag was draped.

The flag is probably one of the most symbolic and emotionally charged relics of American history — commemorating not valor or victory, but rather, tragedy. 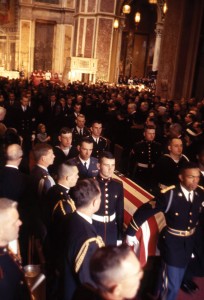 “A woman knelt and gently kissed the flag,” LIFE magazine reported of the scene as JFK’s casket lay in state for two days after his assassination.

“A little girl’s hand tenderly fumbled under the flag to reach closer. Thus, in a privacy open to all the world, John F. Kennedy’s wife and daughter touched at a barrier that no mortal ever can pass again.” 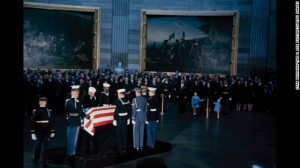 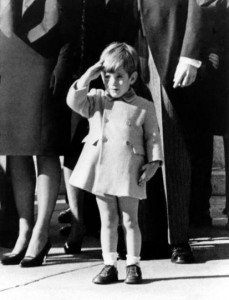 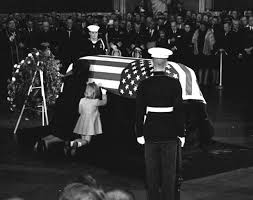 We are honored to have in our February auction, one of the most powerful JFK items we’ve ever auctioned:

The U.S. Flag That Hung Over JFK’s Casket When He Lay in State in the Capitol Rotunda — Given to the Staff Sergeant Who Coordinated the Viewing 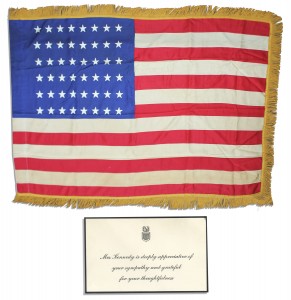 This United States silk flag was used in the funerary services of President John F. Kennedy, hung over his casket when his body lay in state in the rotunda of the nation’s Capitol building.

Includes incredibly detailed provenance, including: a lengthy statement from Vernon Eastin, Staff Sergeant who coordinated the Air Force Honor Guards that stood guard over the President’s body in the Capitol throughout the viewing.

Eastin writes, “…As part of my regular duties I was required to provide military personnel for all official parades and special functions, including Military Honor Guards for funerals and other specified functions. I personally coordinated the Air Force Honor Guards that stood watch over President Kennedy’s body while it was on view in the rotunda of the Capital [sic] Building. I was also responsible for furnishing the correct number of Air Force Personnel to march in the parade at the time of the funeral and internment at Arlington National Cemetery…” 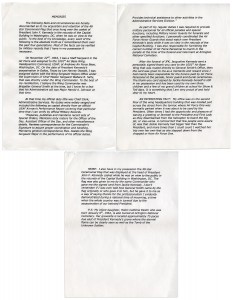 Eastin goes on to list his other job responsibilities, referencing his superior officer and official USAF Airman’s Performance Report from the time. 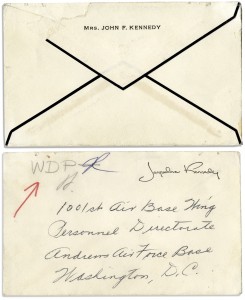 Lot also includes an LOA from Eastin’s son, and a newspaper article on Eastin and the JFK viewing, in which Eastin recollects his military colleagues’ dissatisfaction with the use of the outdated flag for Kennedy’s services; the 49th and 50th stars for Alaska and Hawaii were added to the official design of the American flag in 1959 and 1960.

Also accompanied by a sympathy card and envelope given to Eastin by Jackie Kennedy after JFK’s death. This dramatic flag makes vivid one of the most unforgettable events in America’s history. 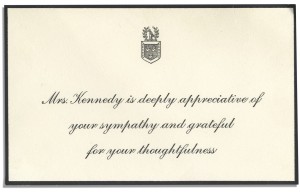 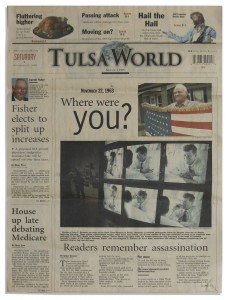 A truly historic piece of American history, and an emblem that represents one of the saddest, most tragic events of the 20th Century.