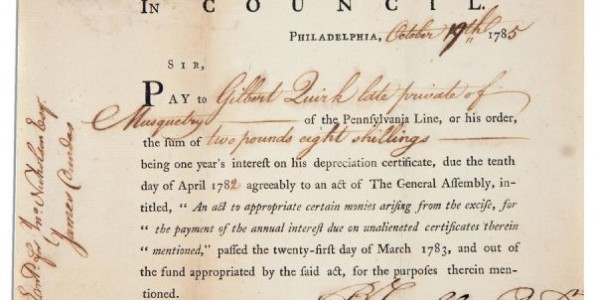 HOW MUCH ARE YOUR BENJAMIN FRANKLIN AUTOGRAPHS WORTH?  WE’LL LET YOU KNOW VIA EMAIL.  If you are looking to appraise, buy, auction or sell your Benjamin Franklin autographs for up to $8,000 – over $100,000 or more each, please email [email protected], phone (310) 440-2982 or contact our auction house, Nate D. Sanders Auctions (http://www.NateDSanders.com).

Not all autographs are skyrocketing in price.  Many are staying put and are not investment quality.  The exception might be Benjamin Franklin autographs.  His signature is now at the level of George Washington — around $6,000 — and his documents are generally selling for more than the first President — between $8,000 and $15,000.

Here are two Benjamin Franklin autographs that we have sold recently.

Benjamin Franklin signs an interest certificate, dated 19 October 1785, one day after being elected President of Pennsylvania. Until May of that year he had served the new American nation as ambassador to France. Now, in a position similar to a modern day governor, Franklin authorizes Pennsylvania Treasurer David Rittenhouse to pay ”to Gilbert Quirk late private of Musquetry of the Pennsylvania Line, or his order, the sum of two pounds eight shillings being one year’s interest on his depreciation certificate, due the tenth day of April 1782 agreeably to an act of The General Assembly, intitled, ‘An act to appropriate certain monies arising from the excise, for the payment of the annual interest due on unalienated certificates therein mentioned,’ passed the twenty-first day of March 1783, and out of the fund appropriated by the said act, for the purposes therein mentioned.” He signs boldly, ”B. Franklin Presid.” with a paraph accentuating his name. The certificate, issued in Philadelphia, is endorsed on the verso: ”Received the within contents in full / For George Bickham / Sam Fulton”. Minor toning and foxing to 7.75” x 6.25” document, with tape repair to verso. Overall near fine condition. 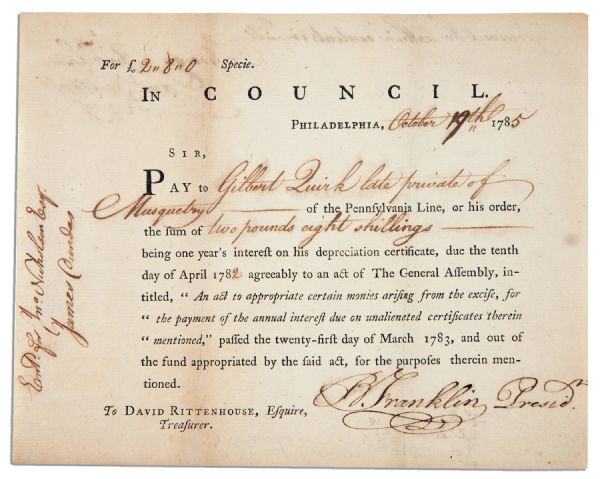 Very desirable Pennsylvania land grant, dated 1 February 1787, signed by Benjamin Franklin. Franklin was appointed President of the Pennsylvania Executive Council in 1785 after serving the new American nation as ambassador to France, where he helped draft the Treaty of Paris. Here, in a position similar to a modern day governor, Franklin grants a parcel of land to James Smith, a Captain Lieutenant of Artillery, in consideration of his services rendered for the United States. He signs boldly on the left side of the document, ”B. Franklin”. One page partially printed document measures 12” x 15” and bears the Pennsylvania state seal in upper left corner. Light toning and soiling, not affecting signature. Overall very good plus condition. Beautifully framed in black and gilt with a portrait of Franklin. 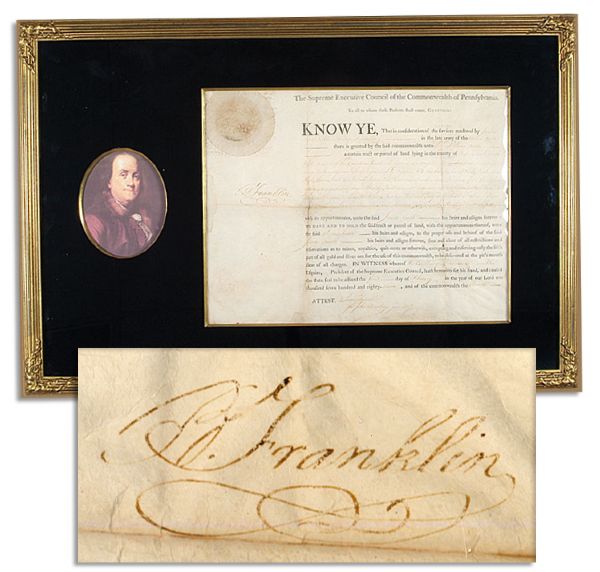 Benjamin Franklin autographs that are on letters start at $22,500 and can reach the stratosphere with excellent content.