FREE APPRAISAL FOR YOUR HENRY VIII AUTOGRAPH.  One of the most expensive autographs, bought in force by American and other worldwide collectors, is not an American President as you might expect, but the ruthless 16th century English monarch from the House of Tudor named Henry VIII.  Here at NateDSanders.com, we have sold 3 Henry VIII autograph in the last three years totaling $130,000 for the trio.  Generally, these days a Henry VIII autograph sells for around $20,000.  Please email [email protected] or phone (310) 440-2982. 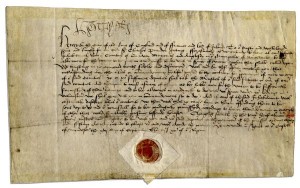 Below is the Henry VIII autograph that we obtained the highest price for — $49,374.

Rare and desirable Henry VIII document signed as King of England and France and as Defender of the Faith. Document appoints Cardinal Lorenzo of Campeggio to the See of Salisbury, which had been promised to him in 1518 and received on 2 December 1524. Shortly thereafter, Campeggio became a key player in Henry VIII’s famed divorce from Catharine of Aragon, caught in the unenviable position of having to choose between Holy Roman Emperor Charles V (and Catharine’s nephew) or Henry VIII. Upon seeking a divorce from Catharine, Henry VIII sought nullification from the Pope, who dispatched Campeggio to England to settle the matter. Under enormous pressure from both sides, Campeggio denied the divorce, which sparked Henry VIII to strip Campeggio of his title. Campeggio did however, keep his life — after the decision, the Pope gave Campeggio the castle in Dozza, Italy and Charles took Campeggio’s family under his protective wing. Supremely rare 16th century document measures 13″ x 14.75″. In very good condition with folds throughout, small holes at folds and chips along left side. Nice, bold signature by Henry VIII. 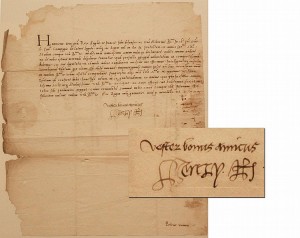 Here is a closeup of the Henry VIII autograph:

The other Henry VIII autograph sold in 2011 was this one:

Fascinating Henry VIII document signed “Henry R”, dated 11 December 1542, to Sir Thomas Wharton, Deputy of the West Marches and Captain of Carlisle. Letter, written soon after Scotland’s disastrous Solway Moss campaign, details King Henry’s plan to promptly release the Scottish prisoners as long as they swear to return to Scotland as agents of England, where they would be expected to foster support for Henry and advocate for the marriage of Scotland’s Queen Mary and Henry’s son, Edward VI. Two page letter with integral address leaf measures 8″ x 11″,  with damp staining and three holes that have been archivally repaired. Good condition considering age.

If you are looking to auction, buy, consign or sell a Henry VIII autograph or other Royalty autographs such as Elizabeth I, please email [email protected].