Defining the Golden Age of 60’s rock-and-roll music in America is no small feat, and David Crosby remains one of the era’s pioneers. As a founding member of two of the era’s most renowned bands — Crosby, Stills and Nash & The Byrds — his talents as a guitarist and singer/songwriter remain unparalleled. 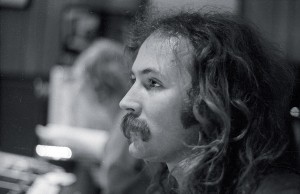 In our current auction, we’re proud to be offering a group of Crosby’s personal items:

At the top of the bill is David Crosby’s iconic worn cape.

Style of course mattered to the band, whose quirky, raucous fashion sensibility defied the mod minimalism of 60’s beat-generation groups of the time.

The cape, then, is an emblem to an era, and truly one of the most unique rock items we’ve seen. 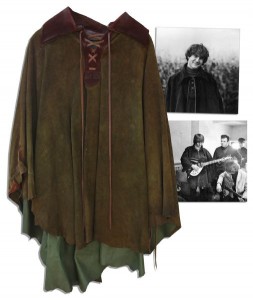 Crosby’s role in ‘The Byrds from the iconic group’s formation in 1964 until his departure in 1967 garnered him his first of two inductions into the Rock and Roll Hall of Fame.

The guitar is the widely recognized Gibson ES-335, customized by Crosby with a Bigsby Vibrato tailpiece tremolo. Dating to 1958, this model was the first electric guitar to introduce the semi-hollow body design.

We’re also auctioning two unique paintings, including this oil on canvas mixed-medium portrait of David Crosby done by Peter Max, in Max’s characteristic psychedelic style. Peter Max is an iconic illustrator and graphic artist, known for the use of trippy, psychedelic shapes and vibrant colors that come to define him.

Here, a photographic image of Crosby’s face is printed in the center of the canvas, surrounded by bright oil paint from every part of the spectrum. It’s really cool, take it from us. 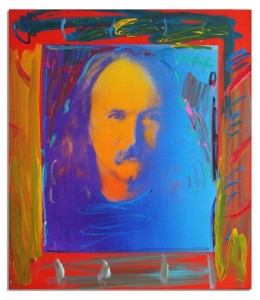 And lastly, we’re auctioning a one-of-a-kind oil painting, also done by Peter Max, from the famous ”Grammy ’91” series. Max was named the official artist of the Grammy’s, while Crosby was honored at the 1991 ceremony with the first-ever MusiCares Person of the Year award — which was given to musicians whose philanthropic efforts equaled their musical passion. 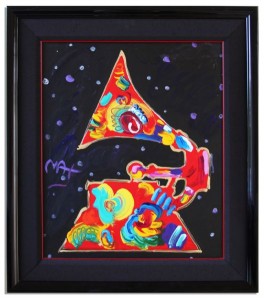 As the rock legend continues to perform today, both in his solo career and reunion tours, be sure not to miss the opportunity to take home some of the most unique Crosby memorabilia we’ve ever seen.