Sell or Auction Your Paul Gauguin Autograph for up to $30,000 or More at Nate D. Sanders Auctions

FREE ESTIMATE. To buy, auction, sell or consign your Paul Gauguin autograph that is for sale, please email your description and photos to [email protected] of Nate D. Sanders Auctions (http://www.NateDSanders.com).

French post-Impressionist Paul Gauguin, now considered one of the master experimental painters of his time, was not particularly considered a “great” until after his death.

Originally, he intended to be a stockbroker, and painted in his free time while living in a 9th arrondissement bohemian Parisian neighborhood surrounded by Impressionists, including Monet and Pissarro — Pissarro who took him under his wing around 1873 and mentored Gauguin for years.

In 1873, Pissarro, Claude Monet, Pierre-Auguste Renoir and Alfred Sisley established a collective for artists to exhibit their work independent of the stodgy gallerists and critics of the time. The collective, ”Societe Anonyme Cooperative des Artistes Peintres, Sculpteurs, Graveurs,” organized eight independent Salons, establishing a place for avant-garde art never before known in France — which was at the time, lampooned, though is now considered exemplary in the evolution of Impressionist art.

We are proud to be auctioning an exceptionally scarce example of an artist autographs with an important 1879 Paul Gauguin, artist autograph letter signed to Camille Pissaro discussing his firm acceptance in the collective.  It sold for almost $30,000. 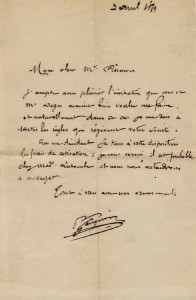 The artist autographs letter signed reads, “My Dear Mr. Pissarro / I accept with pleasure the invitation that you and Mr. Degas were kind enough to extend to me. And naturally in that case I shall abide by all the rules that govern your Societe. Based on this decision, I also have the membership dues available. I will probably see you at Miss Latouche’s and we will talk about this. Yours truly with many thanks, / P Gauguin”.

Gauguin did in fact exhibit his work for the first time in 1879, displaying a sculpture of his son Emile. This was also the first year of the annual exhibition that Pissarro, Degas and Gauguin all displayed their work. 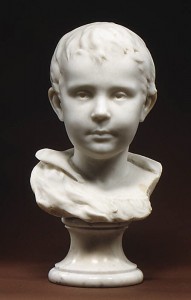 By 1891, Gauguin began to so become dissatisfied with the artistic canon he was so heavily entrenched, he sailed to French Polynesia to run from “everything that is artificial and conventional”. Some of his most famous paintings were completed while he lived there.

In art, a defiant attitude is welcomed because it allowed him to experiment and cultivate a sense of style distinct to only him and the experiences he captured while living away from Europe.

If you are looking to auction, buy, consign or sell artist autographs, please contact [email protected].