“I don’t mind living in a man’s world as long as I can be a woman in it,” Marilyn Monroe famously said. And woman she was, with a long list of descriptors that continue to shroud the sultry icon, from provocateur to temptress, sex symbol to simply misunderstood.

Though we’ve auctioned Monroe items in the past, like the First-Ever Issue of Playboy featuring MM posing, at the time, quite controversially. 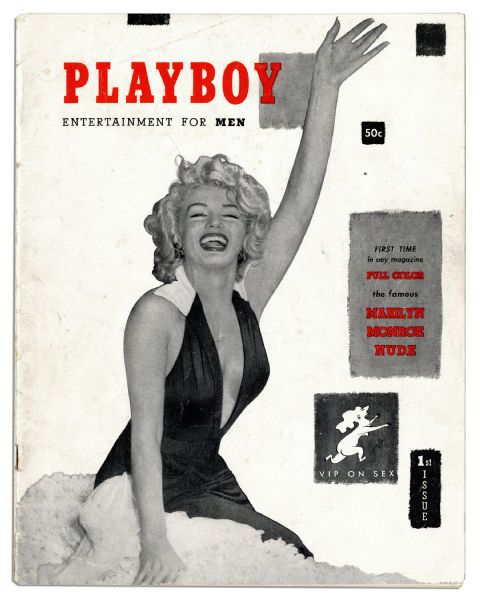 Last month we auctioned Monroe’s own red feather purse — racy as the starlet was herself — for an incredible $25,428. (Click on photo or here for item details)

The silk-lined purse has her famous ”MM” monogram engraved in silver on the inside pocket. Perhaps she wore it out on the town amidst the success of the 1953 20th Century Fox film “Gentlemen Prefer Blondes”, in which Monroe, as the gold-digging Lorelei Lee, truly became an icon with her rendition of “Diamonds Are a Girl’s Best Friend.” 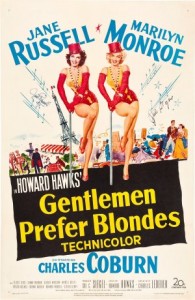 The purse has provenance from the estate of Monroe’s ”Gentlemen Prefer Blondes” co-star Tommy Noonan, who played her wealthy boyfriend Gus Esmond in the film. 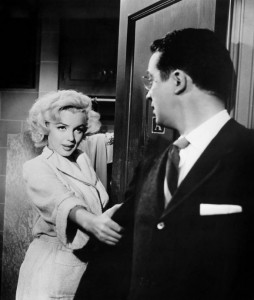 From there, Monroe went on to form her own independent production company, as a woman in a man’s world, and “The Prince and the Showgirl” became the first movie made by Marilyn Monroe Productions. MM starred opposite Sir Laurence Olivier, who also directed the 1957 film, which had mixed reviews, though a snafoo upon snafoo backstory. 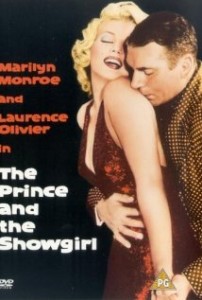 Filming was a topsy turvy affair on set in old England  — bickering between Monroe and Olivier was so intense, their fiery relationship became a memoir-turned-Hollywood-hit in the 2011 film,”My Week With Marilyn” starring Michelle Williams.

The film was based on the diary accounts of personal assistant on the film, Colin Clark’s The Prince, The Showgirl and Me and My Week with Marilyn, about the time he spent escorting her around London after her new husband of two weeks, Arthur Miller had left the country. 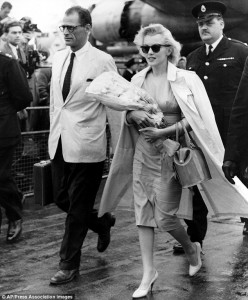 Miller, astute human condition observer that he was, keenly assessed the situation, “…for Marilyn, a natural comedienne, seemed distracted by half-digested spitballed imagery and pseudo-Stanislavskian parallelisms that left her unable to free her own native joyousness. As for Olivier, with all his limitations in directing Marilyn — an arch tongue too quick with the cutting joke, an irritating mechanical exactitude in positioning her and imposing his preconceived notions upon her…”

On set of the 1957 film, she’d don a plush pink robe while she was in makeup, which we recently auctioned with provenance from Harry Jordan, set dresser on the film and personal dresser to Olivier. (Click on photo or here for item details) 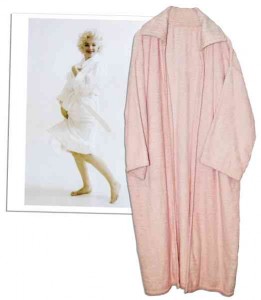 Perhaps she even wore this robe while sparring with Sir Oli in London-Town. She was, after all, dancing to her own beat, “If I’d observed all the rules I’d never have got anywhere.”