Comebacks are the stuff of legend in Hollywood, and topping that list of fabled comeback artists is Joan Crawford — who, until earning the lead role as Mildred Pierce in the 1945 film noir that won her an Oscar, was labeled ‘box office poison’ by the same industry who first brought her to fame.

The Oscar is symbolic in Crawford’s career, and has an incredible backstory that we’ve become privy to as we’ve auctioned the original Oscar statue awarded to Crawford for Outstanding Performance by an Actress in a Leading Role for a record price of of $426,732.

Director Michael Kurtiz initially doubted Crawford, telling Warner Brothers executive producer Jack Warner, “She comes over here with her high-hat airs and her goddamn shoulder pads…why should I waste my time directing a has-been?” Further demeaning the so-called “Queen of the Movies,” Curtiz demanded Crawford prove her suitability by taking a screen test. 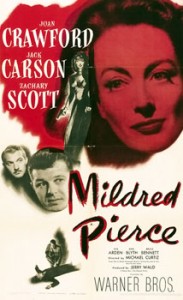 The original trailer from the 1945 film dubbed Joan’s role as Mildred Pierce, “her most daringly different portrayal.” Few can forget Crawford, endlessly fur-clad, as the “A woman who left her mark on every man she met.” 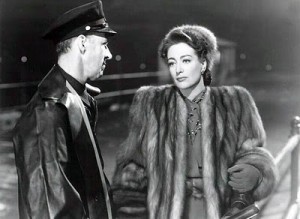 The film skillfully adapted the original James M. Cain novel, with countless memorable scenes of dialogue depicting an intensely fraught mother-daughter relationship between Crawford as Pierce and Ann Blyth as her venomous daughter, Veda, at a time when women were generally portrayed as subservient homemakers. 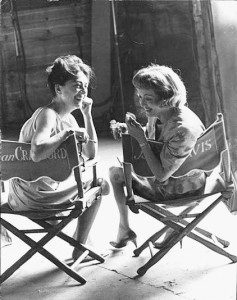 But the off-screen drama continued the night of the Oscars, this documentary clip shows, as Crawford, who famously felt she deserved the Oscar but thought she’d lose to competitor Ingrid Bergman, pretended to be ill and stayed home the night of the ceremony on 7 March 1946. When her name was called, director Michael Curtiz accepted the Oscar on her behalf with Crawford listening to the broadcast on her radio.

Later that night, she invited reporters to photograph her accepting her award from her bedroom — her pneumonia subsided in time for her to have her hair and makeup done and accept the Oscar below — famously in bed.

Upon receiving this Oscar, Joan was quoted, “Whether the Academy voters were giving the Oscar to me, sentimentally, for Mildred or for 200 years of effort, the hell with it — I deserved it.” 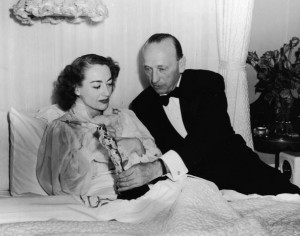 As one of the most coveted Oscars with an incredible backstory, we’re proud to be auctioning such a legendary token of Hollywood history. (Click on Oscar below or here for more details.) 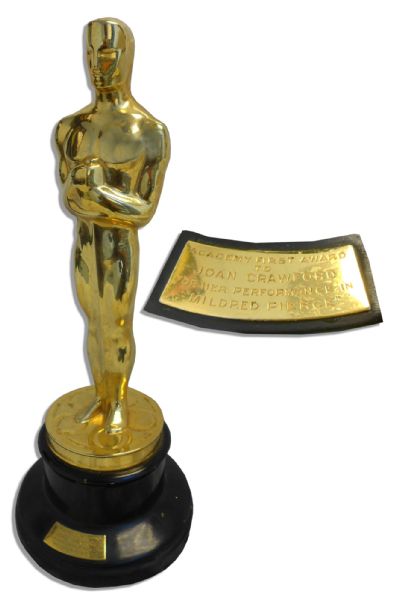